Who Gets Custody When Parents Separate?

When parents separate, both parents have the same equal right to have the children in their primary care. This is the default position unless there is a court order or a written agreement stating otherwise, or unless one parent permits the child or children to reside primarily with the other parent. It used to be the case in Ontario that courts gave priority to the mother in deciding living arrangements, however, this has not been the practice since the 1970s. In fact, it is quite common for fathers to have the primary care of the children.

In determining which parent should make major decisions for the child (custody) and how often they are in the care of each parent (residential schedule), a court will focus on what would be in the best interest of the child – and not just the wishes of the parents. The best interests of the child are influenced by a variety of considerations, including those outlined in section 24 of the Children’s Law Reform Act. It is also possible for a third party, such as a grandparent or other family member to seek custody or scheduled time with a child. This is especially true if neither parent is capable of caring for the children. 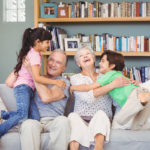 Next Post What are Grandparents’ Rights with Respect to a Grandchild?